Compare prices on car hire in Rende from all the major brands and find the best deals. When you book through us, unlimited mileage and insurance are always included in the price given. 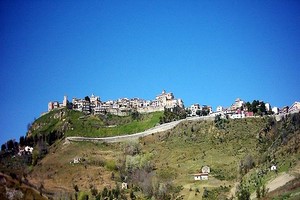 Rendering belongs to the province of Cosenza and is located in the region Calabria, located in the southern part of Italy .Calabria bordering the Mediterranean Sea in the west, the region and the island of Sicily in the south and the Ionian Sea in the east. Rendering is located north of the region, about 15 km northwest of the provincial capital of Cosenza and about. 15 km from the west coast. In 2004 there were about 35 000 inhabitants in the city, but if you expect the students at the University of Calabria, the figure rises to approx. 60 000.

The first time the name Gutter used was in 1095 It was also around this time that the castle was built in Rende, which one can still see the city. Rendering is divided between the historic town and the newer section, and in town, you should visit include the church of Santa Maria Maggiore, with its ancient frescoes and the City Museum which is housed in Palazzo Zagarese.

The nearest airport is Lamezia Terme Airport located about 70 km south of Cosenza.