Compare prices on car hire in Salerno from all the major brands and find the best deals. When you book through us, unlimited mileage and insurance are always included in the price given. 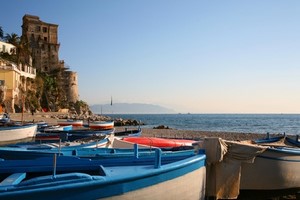 Salerno is the capital of the province of Salerno with a population of almost 150 000 (2009). Salerno is located in the southern region of Campania situated on the west coast, and it is about 50 km to Naples in the south.Irno River flows through the city and flows into the Gulf of Salerno which leads out into the Tyrrhenian Sea. When the city was a Roman colony in 194 BC Kr, got the name Salernum.

The historic town of Salerno is one of the best preserved old towns along the Italian coast, and in the middle of town stands the cathedral which was first listed on the 800-number and is equipped with the pulpits of the 1100s. In the 1950s it was constructed a beautiful waterfront with views of the mountains and with different types of palm trees. If you drive about 30 km northwest, you come to the volcano city of Pompeii which was buried in the ashes of Vesuvius in 79 AD. The volcano itself is about. 40 km northeast of Salerno.