Compare prices on car hire in Sorrento from all the major brands and find the best deals. When you book through us, unlimited mileage and insurance are always included in the price given. 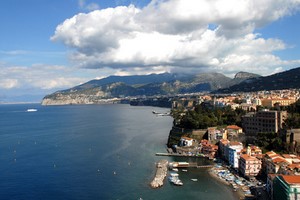 Sorrento is a popular holiday destination because of its location by the sea and the cultural and historical attractions. The city is very old and was below both the Greeks and Romans, and one can still see remnants of the Greek city walls. Of the museums there including archaeological museums, and that one can see buildings and churches that stretch for hundreds of years ago. It is only approx. 40 km to Mount Vesuvius, about 30 km to Pompeii which was buried by volcanic ash in 79 AD.

Naples Airport is an international airport which is approx. 50 km from Sorrento.