Compare prices on car hire in Taranto from all the major brands and find the best deals. When you book through us, unlimited mileage and insurance are always included in the price given. 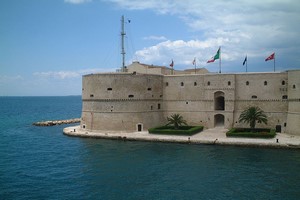 Taranto is the capital of the province of Taranto and belongs to the region Apulia that can be found in southern Italy , the Italian heel.The region is a peninsula that juts out into the Ionian Sea on the east side of the country. Taranto is located on the west coast of the heel, adjacent to Tarantobukta, and it is about. 50 km to the east coast and the Adriatic Sea. Taranto was founded early in the year 705 BC Kr, and today is the population of almost 200 000 (2008).

Because the city has existed as long as there are many historical sites. Several of these are located in the old town, including a beautiful castle with four towers erected at the end of the 1400’s and the ruins of a Greek temple from about year 500 BC. Cathedral of Taranto derived from year 1070 and decorated inside with paintings and frescoes, and one should also visit the historical museum of Taranto National Museum.