Compare prices on car hire in Trento from all the major brands and find the best deals. When you book through us, unlimited mileage and insurance are always included in the price given. 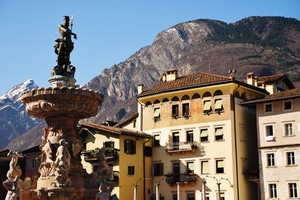 Trento is the capital of both the province of Trento and the region of Trentino-Alto Adige. The region is located in northern Italy , bordering Austria in the northeast and to Switzerland in the northwest.Trento is situated on the banks of the River Adige, and is centrally located in the southern part of the region. It is approx. 80 km to Verona in the south and about 150 km to Venice which is located on the Adriatic coast in the southeast.Population is measured at approximately 115 000 (2009).

Trento is an ancient city probably founded in 300 century BC Kr. and parts of the old medieval town walls are still visible. Urban landscape is characterized by both Italian and German architecture and many of the buildings from the 1500s have been renovated. Castello del Buon Consiglio was built between 1200 – and 1500’s and today houses the National Museum. Saint Vigilius cathedral stands on Piazza Duomo, and was built in 1200 – and 1300’s.

The nearest airport is Bolzano Airport which is located about 50 km north of Trento.