Compare prices on car hire in Viterbo from all the major brands and find the best deals. When you book through us, unlimited mileage and insurance are always included in the price given. 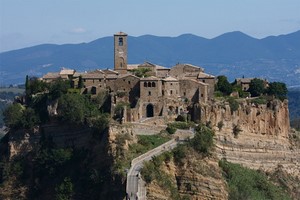 Viterbo is the capital of the province of Viterbo and is located in the region of Lazio. Lazio has a central location in the country and borders the Thyrrenian coast to the west, while the city is located about 50 km inland. The population was measured at just over 60 000 in 2008, and it is about. 80 km to the capital of Rome in the south.This is an old city that was probably built by the Etruscans and was a Roman colony called Vicus Elbii.

The historic district is one of the best preserved ancient cities in the central part of Italy. Around the old city is a city wall from 1000 – and 1100-number and that you come into this neighborhood through an old city gate. Cathedral of St. Lorenzo was built in the 1100s, while the Palazzo dei Papi was the seat of the Pope between 1257 and 1281 Around the city there are heat sources, which was also frequented in Roman times.

It is approx. 70 km to Leonardo da Vinci Fiumicino Airport the largest airport in Italy.