Whether you go to Riga or another city of Latvia, you will find it convenient to rent a car. People choose the option of a car hire when they are on a business trip or are spending time out with their families and friends. One of the core benefits of car rental is that you can explore the whole city at affordable prices. Let’s see what types of rental services are available and how to choose the best one. 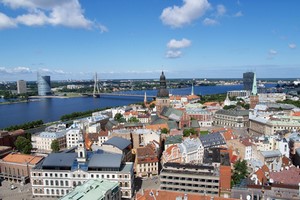 Riga is the capital city of Latvia. As of 2019, its total population is 632,614. It is significantly larger than other Latvia cities and is considered the primate city. Plus, it is home to one-tenth of the population of 3 Baltic States. The territory of Riga covers about 117 square miles and is present 1 to 10 metres above the sea level, on a sandy and flat plain. Founded in the 12th century, Riga is one of the oldest cities in Europe. It was once a member of the Hanseatic League. Its historical centre is a UNESCO World Heritage Site.

Riga’s historical centre is widely famous for its Art Nouveau architecture and wooden work. The city gained quick popularity after hosting the 2006 NATO Summit, the 2003 Eurovision Song Contest, and the World Women’s Curling Championship. Plus, it has a busy and large airport that accommodates hundreds of people. In 2016, more than 1.3 million people visited Riga for business and personal purposes. It is a member of the Union of the Baltic Cities and Union of Capitals of the European Union. More than 100 sports club are present here.

Pļavnieki is a Riga neighbourhood. It is present on the right side of the river Daugava. Its territory has been used for agricultural purposes for many years. Pļavnieki is about 6.6 kilometres away from the centre of Riga. In 1978, various new residential colonies and commercial centres were established here, and the majority of buildings we currently see were built in the 1980s. Pļavnieki is densely populated and is known for its rich historical, cultural and economic life. As of 2018, the total population is 47,185. It is spread in an area of 1,153 square miles.

Dreiliņi is about 8 kilometres away from the centre of Riga. It is present on the eastern edge of the city and is home to some of the finest country-style buildings. You can visit Baltinavas Street to see some of those buildings. Their construction began in the 1980s, and the first inhabitants moved Dreiliņi in 2004. Today, the reconstruction of several buildings is being done in order to make Dreiliņi more and more attractive for tourists. Some of the major attractions are The Freedom Monument, House of the Black Heads, and Riga Central Market.

The Ethnographic Open-Air Museum of Latvia is a famous museum situated outside Riga. It is present on the Jugla Lake shores. The museum is about 14 kilometres away from the centre of the city, and you can reach there through a rental car in just 20 minutes. This museum was opened to the public in 1932 and has over five buildings. Various cultural events are organised here, such as craft and traditional festivals and folk concerts. It is best known for promoting traditional Latvian culture and lifestyle with its events.

Riga Zoo is situated in Mežaparks, on the western side of Ķīšezers lake. It is home to over 3500 animals. Every year, more than 250,000 people visit the zoo. It is 8.9 kilometres away from the centre of the city, and it won’t take you more than 15 minutes to reach there through a rental car. The zoo offers plenty of sponsorship options, which means you can become an honorary guardian of an animal of your choice by donating some money. In 1988, this zoo introduced the European tree frog. The species is now found in different parts of Courland.

Riga Motor Museum is one of the biggest antique vehicle museums in the world. It is 11.4 kilometres away from the centre of the city, and you can easily reach there in 20 to 30 minutes depending on the type of car you have rented. Since 1992, the museum is a member of IATM-ICOM (International Association of Transport and Communication Museums). One of the best parts is that the museum features a sports club and a café. Its building has been designed by architect Viktors Valgums, and for many years, it is being called a state museum.

Vērmane Garden is a popular public garden in the city of Riga. It is spread in an area of 12 acres and was created in 1814. The old name of this garden is Wöhrmann Park. It is 2.8 kilometres away from the city centre, and a rented car will take you there in 8 to 10 minutes. The park is praised for its tall and exotic trees and beautiful flowers. Plus, it has a restaurant where you can sit and relax while having some food with your family members or friends.

Riga International Airport is the busiest international airport in Riga. It is the hub for SmartLynx Airlines, RAF-Avia, and airBaltic. Companies like Sixt, Economy Bookings, and EuropCar provide their rental car services here. We encourage you to check their official websites for information on prices and booking terms. The closest destinations are Airport Hotel Mara, Wellton Riverside Spa Hotel, Grand Palace Hotel, and Rixwell Elefant Hotel.

Spilve Airport is situated 5 kilometres away from centre of the city of Riga. It became the first international airport in Latvia in the 1920s. The nearby destinations are The Fortress and Avitar Hotel Riga. If you want to rent a car, we suggest you try ACE Rent A Car, Prime Car Rent, EuropCar Auto Noma or Discover Cars. Check their official websites for further details.

Liepāja International Airport is situated in the west of Latvia. Just like Riga International Airport, it is a major airport. It is about 210 kilometres away from Riga and nearly 55 kilometres away from the Lithuanian border. The closest hotels are Europa City Amrita Hotel, Liva Hotel, and Art Hotel Roma Liepaja. Liepaja Airport Car Rental, and Sixt provide affordable rental car services in this area.

Depending on its historical features, Riga is considered a monocentral city with over 36 percent of people working in the centre. Thus, the condition of its roads is good and the traffic system is well-maintained. There are three bridges over the river Daugava that contribute to the transit traffic via the centre of the city. The traffic in the core contains transit over the city and transport with destination into its centre.

Daily traffic over Daugava is over 400 thousand passengers, and half of them use rented and private cars. Therefore, you will see that a notable number of vehicles are entering the streets of the city core every day. There are some driving rules your driver needs to follow. For example, he should have a driving license and identification card while driving on the busy roads of the city.

As a passenger, you need to have your passport and an identification card with you when you leave the hotel to explore the beauty of the city. Most of the inner-city public transport roots have their termination in the central part of Riga. Just like other cities of Latvia, Riga has a couple of parking zones. These have been indicated by particular P-zone signs. Pay and Park ticket machines are available in different parts of the city. In addition, multi-stored parking places are present here for the convenience of car drivers.