Compare prices on car hire in Windhoek from all the major brands and find the best deals. When you book through us, unlimited mileage and insurance are always included in the price given. 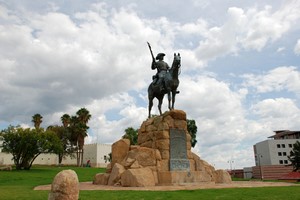 Windhoek is the capital of Namibia and is centrally located in the country.The city is situated on a hill that is about 1 700 meters above sea level. This is the largest city and commercial center in Namibia, and in 2007 the population measured at almost 270 000 Founded in the 1800s and was the capital of German Southwest Africa from 1892 to 1915.

Windhoek bears still look after the German government, and the architecture is split between modern buildings and German colonial territory. Not only the architecture bears witness to the German influence, but you can visit German restaurants, and many also speak German. Christuskirche is a beautiful church that was built in the late 1800’s, and St. George’s Cathedral is one of the smallest cathedrals in southern Africa. Alte Feste & State Museum is one of the most famous museums in Windhoek that covers the history of the site.

Windhoek Hosea Kutako International Airport has one of the world’s longest runways and is located about 45 km outside the city.