Compare prices on car hire in Helmond from all the major brands and find the best deals. When you book through us, unlimited mileage and insurance are always included in the price given. 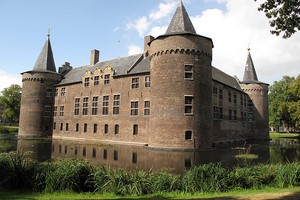 Helmond is a city in the province of Noord-Brabant in the south of the Netherlands , 15 km east of Eindhoven .84,000 inhabitants live in Helmond (2003).

The first settlements in Helmond was established around 1000 AD The first written traces exist in an object of Pope Alekander III in 1179 In 1232 received town status Helmond. In the center lies a castle that was built by Jan III van Verlaer in the 1300s. There are several textile companies, mostly along the channel Zuid-Willemsvaart   which runs through the city.Here is the art center Paalwondingen with cubic drawings by Pieter Blom in 1978. Helmond produces marque MAX. The city offers good conditions for cycling, shopping and walking.

Eindhoven Airport is 20 kilometers from the city of Helmond.