Compare prices on car hire in Hilversum from all the major brands and find the best deals. When you book through us, unlimited mileage and insurance are always included in the price given. 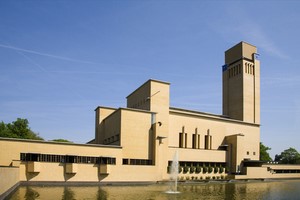 Hilversum is a town 25 km southeast of Amsterdam Noord-Holland province.The city is located in the beautiful forest and lake district Het Gooi and has 100,000 inhabitants.

The city that once was called the Amsterdam garden offers excellent conditions for cyclists and walkers who want to explore the heathland and woodland areas around Hilversum.In 2006 opened the area Zanderij Crailo, a large natural area, which is associated with Spanderswoud forest. There are bike and hiking trails in the area that is one of Holland’s largest nature areas. The city is also famous for its modern architecture, Tower Hall Hilversum is perhaps the most special. Hall Hilversum, according to architecture books textbooks   Dudok’s leading work.Hilversum is the center of Dutch radio and television industry. The city has an institute for sound and vision, and the country’s television and radio archives.

Schiphol Air Haven in Amsterdam is the nearest airport 30 km to the south of Hilversum.