Compare prices on car hire in Leeuwarden from all the major brands and find the best deals. When you book through us, unlimited mileage and insurance are always included in the price given. 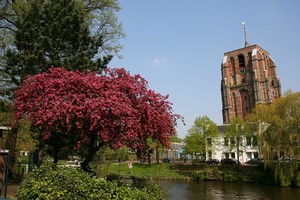 Leeuwarden is situated north of the Netherlands , 50 kilometers west of Groningen .The city is the capital of the province and has 91,000 inhabitants (2005). Leuuwarden the railroad and canal junction.

Leeuwarden area has had settlement in 900’s. The town was granted city status in 1435, and was an active trading center until the river Middelzee dried up in the 1500s. In 1500-1700’s was Leeuwarden known for its gold and silversmiths’ wares. Leeuwarden has many beautiful buildings from this period. The old town is surrounded by canals, and picturesque buildings that the church from the 1300s, the old trading Waag, the church of St. Boniface, Kanselarij, the leaning tower Oldehove, including town hall The city’s attractions include among others a National Ceramic Museum and the Museum of Natural History. Leeuwarden has symphony orchestra and a Frisian Museum. At Easter, the Netherlands held the largest flower market here.

Groningen Airport is 53 km from Leeuwarden.