Compare prices on car hire in The Hague from all the major brands and find the best deals. When you book through us, unlimited mileage and insurance are always included in the price given. 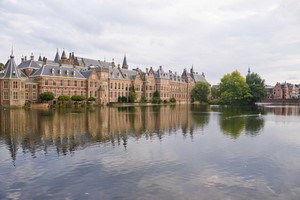 The Hague is the Netherlands’ third largest city with 465,000 inhabitants in the city, and 705,000 including suburbs.The Hague is located in South Holland province on the North Sea, south of Amsterdam .The city is the seat of the Dutch rejeringen and the headquarters and residence of the royal family.

The Hague is perhaps best known for its International Court of Justice, the Hague Tribunal. The city is beautiful and has many famous buildings and artworks. The Mauritshuis, a   former Renaissance palace, the art museum with a Rembrandt collection.The philosopher Spinoza’s tomb is located in The Hague. The Hague originated around the hunting palace ca. 1250. The Count’s castle Binnenhof, located in the old town with bydammen Vijver, is one of the city’s most famous buildings. The summer palace Huis ten Bosch, the royal residence. The city has attractions such as Park Clingendael with a Japanese garden which is Europe’s oldest. It is also Peace Palace which was built 1907-13 and miniature city Madurodam.  The beaches are not far away.

Rotterdam Airport is located 16 kilometers south of The Hague.