Compare prices on car hire in Arendal from all the major brands and find the best deals. When you book through us, unlimited mileage and insurance are always included in the price given. 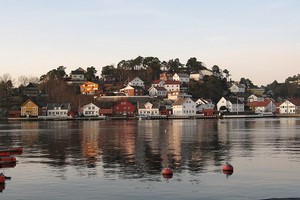 Arendal, which has approx. 40,000 inhabitants (2009), located at the south coast, not far from Kristiansand – and is the administrative center of Aust-Agder county.It is mentioned in written sources from the 1500s and was given city status in 1723. Previously, the channels instead of the streets in the city – as was often called the “Venice”. These were eventually filled, but a last remnant currently represents the city’s famous harbor – Pollen.

The original city was built on seven islands and reefs – and the town was eventually named Arendal for the largest of these. There are still many old, well preserved buildings. Tyholmen was in 1991 awarded the prestigious, international conservation award Europa Nostra – and is considered Arendals main attraction. Among the buildings at Arendal, the following are mentioned: the Old Town Hall from 1812 to 1813 (the second largest wooden building), Kløcker house from 1826 (which houses Arendal town museum), Steen House from 1720 years (a private museum, which is embedded in a larger wooden building from 1800) and the old police station (1658/1710).

Some of the other attractions in Arendal: Trinity Church from 1888 (with its 80 m tall church tower – also called “Skagerrak Cathedral”), Merdogaard on Oy Merdø (skipper and losmuseum in a house from around 1640) and Aust-Agder historical center Langsæ .