Compare prices on car hire in Drammen from all the major brands and find the best deals. When you book through us, unlimited mileage and insurance are always included in the price given. 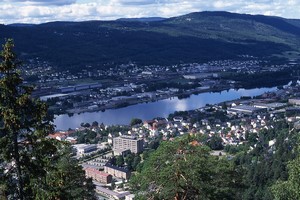 Drammen, which has approx. 62,000 inhabitants (115,000 in metropolitan area), situated at the head of the Drammen fjord – and administrative center in the southeastern Norwegian county of Buskerud. Drammen River divides the city into two, where Bragernes (with the largest portion of the center) is located in the north, while Strømsø (including the railway station) is located in the south. Until 1811, Bragernes and Strømsø two independent charging locations. Drammen occurred when the two charge sites were combined.

Among the sights to Drammen Museum mentioned. It has its main branch in the former light house Marienlyst (built ca. 1770) in the district Strømsø. Also Austad farm (from 1807) and Gulskogen farm (from the end of the 1700s) – both located just outside the city-managed by the Drammen Museum.

Otherwise, the Drammen Theatre a significant attraction in the city. The building was inaugurated in 1870 – and in recent years fully restored after a major fire in 1993. It has been awarded the Europa Nostra Medal for good restoration work. The heart is the old Bragernes peat – as in connection with the millennium was elected Drammens millennium.

One attraction of the very special nature of the tunnel spiral in Bragernesåsen (built in 1953). It winds its six and a half times around its own axis – before it meets the viewpoint of Spiral Mountain, where there is a restaurant and a large recreational area.