Compare prices on car hire in Egersund from all the major brands and find the best deals. When you book through us, unlimited mileage and insurance are always included in the price given. 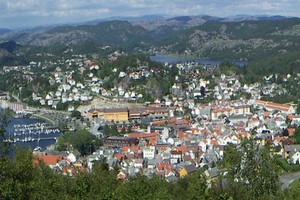 Egersund is located on the west coast countries – far south in Rogaland county, near the border with the neighboring county of Vest-Agder. (Approx. 40 minutes by car from Stavanger .)Egersund has about 10,000 inhabitants (2009), and is the administrative center of Egersund municipality.

It is made of archaeological findings that show that people have been living in the Egersund area since the Stone Age – and at the end of 1200.tallet there were two churches here. Egersund has had status as a city in 1798.

Egersund has one of the largest concentrations of urban wooden buildings in Norway – and are therefore characterized as antiquarian protected. Among the attractions elsewhere there are a few museums in particular be mentioned: Dalane Folk Museum (a museum of local history of the valleys region, Egersund is a part) and Egersund Fayancemuseum (documenting the city’s traditional manufacturing fayance and stoneware).

A very special attraction is the Stop Read Einan – an over 1000 year old stone circle just outside the center, which has been compared with England’s famous “Stonehenge” (but in a much smaller version).