Compare prices on car hire in Elverum from all the major brands and find the best deals. When you book through us, unlimited mileage and insurance are always included in the price given. 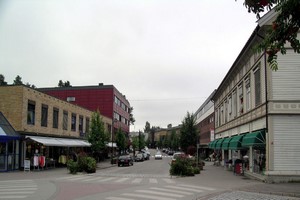 Elverum is located in the inner part of the eastern region – specifically in the Eastern Valleys of Hedmark county. The population in the city itself is located on ca.13.500 (around 20,000 in the entire municipality of Elverum), and Elverum has had city status since 1996.

The Norwegian military has several military installations in Elverum area – and the popular culture built cube Arena (which includes facilities such as sports and concert hall) is the result of a collaboration between military and civil society in Elverum. It is also the military history that has created the city, based on the Christian fortress ruins, which was filed here in the 1600s. The ruins of an important monument.

Otherwise, there are two national museums in Elverum: Glomdalsmuseet (one of the largest historical open-air museums) and the Norwegian Forest Museum.

There are also a few art galleries in the city – which Elverum Art Gallery, which opened in 2005, is the largest.

When it comes to festivals and events, please Grundsetmartn (one of the oldest markets) and the Festival of Elverum mentioned. The former is held every year in March – the latter in August.