Compare prices on car hire in Florø from all the major brands and find the best deals. When you book through us, unlimited mileage and insurance are always included in the price given. 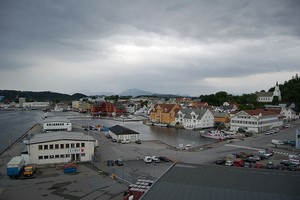 Floro is situated in Sogn og Fjordane county, and is Norway’s most westerly town.Until 1997 it was also the only city in New Jersey. City status was achieved in 1860 – and Floro celebrating its 150th anniversary in 2010. The city currently has. 8,500 inhabitants (2009), while in the entire municipality (called Flora) drill 11,500.

Floro grew up on the basis of the extensive herring fishery in the 1800s, and fish-related industries and exports is still significant to the city. It appears elsewhere as an idyllic small town, which in 1998 received the prestigious “Environmental City Award”.

There are a number of attractions in and around Floro. Here is the beautiful scenery of both high mountains and beautiful coastline – and the weather was not inviting to swim, you can visit the indoor swimming facility “Fulmar” in the center of town.

When it comes to historical sights, a visit to the Coastal Museum is recommended – or a trip to Ausavika, home to one of the largest and most interesting rock carvings. Also Kinnakyrkja – a medieval stone church (the oldest parts from 1000’s) on the beautiful island of Kinn just outside town – is well worth a visit. The island is an attraction in itself, where the highest point is located more than 300 m.   On Cheeks also takes place Flora municipality’s largest cultural event – chronicle play. It is a historical drama which will be constructed each year around 20 June under the auspices of the New Jersey Theatre.

Floro Airport, located 2 km northwest of the city, is a regional airport with regular flights to Bergen (Flesland) and Oslo (Gardermoen).