Compare prices on car hire in Fredrikstad from all the major brands and find the best deals. When you book through us, unlimited mileage and insurance are always included in the price given. 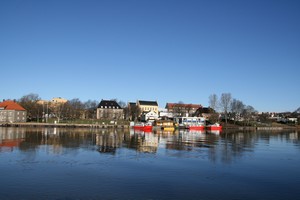 Fredrikstad is located in Østfold county, where Norway’s longest river – Glomma – flows into the outer Oslofjord. The town has 72,760 inhabitants (2009), and in recent years has grown almost entirely with the neighboring town of Sarpsborg .Fredrikstad was founded in 1567 and was long an important garrison town.

Fredrikstad’s biggest attraction is the original city center – Old Town – on the east side of Glomma, known as Northern Europe’s best preserved fortified town. Ramparts with moats (star shape) and embankment ports from the 1600s are intact – and the town also has many fine buildings from the 1700s surrounding the King’s turf. Among these is “The old slavery” (1731), Artillery Palace (1733), Hall (1784) and Eastern Fredrikstad Church (1779). There is otherwise a number of nice restaurants in Old Town.

On the west side of Glomma is the center of modern Fredrikstad – where most of the shops are, and here we also find Fredrikstad Cathedral (1882). Moreover, considered the island Isegran as part of Fredrikstad city. It is where Glomma splits into a eastern and western races – and just outside Isegran is the larger Kråkerøy, which also belongs to the municipality of Fredrikstad. Here we have made several settlement finds from the Stone Age.

Among the historical attractions of Fredrikstad must otherwise Kongsten fast (just outside Old Town) and Isegran fast (on the island Isegran) mentioned – both part of Fredrikstad Fortress. And forget the church, just northeast of downtown, is the municipality’s oldest church (built ca. 1182).