Compare prices on car hire in Gjøvik from all the major brands and find the best deals. When you book through us, unlimited mileage and insurance are always included in the price given. 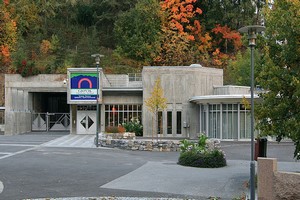 Gjøvik is located in southern Norway, on the west bank of Norway’s largest lake, lake. With nearly 30,000 inhabitants, Gjøvik is the largest city in Oppland county. It grew up around the old Gjøvik farm, and city status was achieved in 1861. Gjøvik gård (listed at the beginning of the 1800s on the remains of the medieval manor Gjøvig) is currently the city’s cultural center.

Among the attractions is the Gjøvik Olympic Mountain Hall (built in conjunction with the Winter Olympics in nearby Lillehammer in 1994) is the largest indoor hall in the mountains (includes ice rink, swimming pool and concert hall).

Otherwise, Gjøvik main attraction the old steamship “Skibladner” – the world’s oldest paddle steamer that goes in the fixed route traffic (for summer). The call at the other towns around the lake (Lillehammer, Hamar, Moelv) – and places the Cape, Panengen and Eidsvold. “Skibladner” is also used for charter traffic, and is also known under the nickname “Mjøsa white swan.” It was built in 1856, and could thus in 2006 celebrating its 150th anniversary.