Compare prices on car hire in Glomfjord from all the major brands and find the best deals. When you book through us, unlimited mileage and insurance are always included in the price given. 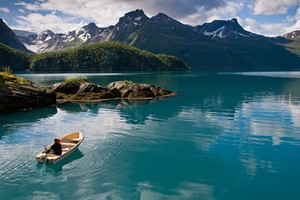 Glomfjord is almost at the end of the almost 20 km long Glomfjorden in Meloy municipality in Nordland county. Most deep travel the steep rock face heap to 883 feet. Here we also Glomfjord power plants – known in connection with the Allied sabotage campaign “Operation Musk Dunder” under 2 World War II. The village has about Glomfjord. 1,200 inhabitants (2009), and one of the most beautiful stretches of road – “Coastal Route” (Route 17) – passing the center.

Glomfjord associated by many first and foremost with the industry, since one of the North’s largest industrial areas (Glomfjord industrial park) is located here. But the area is also rich in possibilities for unique nature experiences.   The nearest part of the second largest glacier – Svartisen – located close to 2 mil southeast of Glomfjord. Just outside downtown is also the much smaller Glombreen, where we also find the 1,200 meter high mountain Istinden. It held both the glacier and mountain hiking in the area. Meloy municipality also has a beautiful coastline, where it is possible to vacation as “island hopping”.

Glomfjord biggest attraction is Glomfjord Alpine Centre, located a short distance from the village. Here it is also suitable for snowboarding activities, and the plant is characterized by the magazine “Free Flow” as one of the best snowboarding venues in Norway.