Compare prices on car hire in Grimstad from all the major brands and find the best deals. When you book through us, unlimited mileage and insurance are always included in the price given. 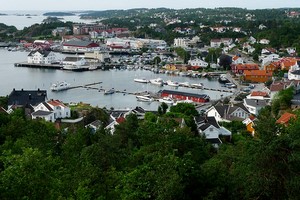 Grimstad is a city with approx. 20,000 inhabitants (2009) which is at the Norwegian Sørlands Coast – specifically in Aust-Agder county. It received city status in 1816, and the story is closely related to shipbuilding and shipping activities. Still the shipping industry and maritime related industries important to the city.

Grimstad called otherwise often “Poem Ernes city”, because Norway’s two internationally best-known writers – Henrik Ibsen and Knut Hamsun in different ways have influenced the city with his presence. Ibsen was an apothecary’s apprentice here when he made his debut as a playwright in 1850 – and Hamsun lived on his beautiful farm Nørholm from 1918 until his death in 1952.

Grimstad town museum has several specialty divisions, where the “flag ship” is Ibsen Museum, located at the Ibsen House (in Henrik Ibsen’s street, of course). Ibsen House (built in 1758) includes an authentic pharmacy from his time in the city, and is Norway’s oldest Ibsen museum (opened in 1916).Reimann farm (where there was a pharmacy that Ibsen work) is a wooden building complex from 1750’s, such as houses showrooms for Grimstad Art Association.

Of the other museum departments must Grimstad maritime museum mentioned. It is housed in a former shipyard.   And Dømmesmoen in Shoreline, just north of downtown, the Norwegian horticultural museum – with the former State horticulture school next door. There is also a beautiful park, where such can experience the 500-year-old Eden-oak. Nearby is the Eden Church – a stone church from the 1100s, in an area that otherwise contains a number of burial mounds and other historical relics.

In the forest in the Eden Church is the region’s most spectacular stage (outdoor) – Fjæreheia – built in a former granite quarry. And it must of course be noted that Grimstad, the Norwegian city with most sunny days a year, has beautiful beaches both west and east of the center.