Compare prices on car hire in Hammerfest from all the major brands and find the best deals. When you book through us, unlimited mileage and insurance are always included in the price given. 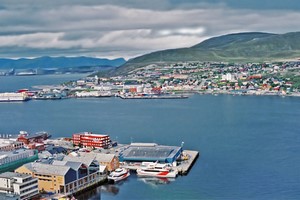 Hammerfest is located in the county of Finnmark in northern Norway , and has about 9,500 inhabitants (2009).The city is located on Kvaløya, which is connected to the mainland via Kvalsund bridge.

Hammerfest is the world’s most northerly cities, and the Arctic Circle. Many tourists who visit the city during the summer, will therefore experience the midnight sun. Hammerfest is also one of the oldest towns in northern Norway, and was given city status in 1789.

From Hammerfest is a ferry connection to a variety of places in Northern Norway , and the city is also the port of call for Hurtigruten (which sail between Bergen and Kirkenes ).

The city’s tourist attractions are first and foremost the Arctic nature of coastlines, mountains and fjords, as well as cutting the farm with its beautiful islands. In addition, there is good fishing and boating and a host of outdoor activities.

Other famous tourist attractions include Hammerfest church from 1961 – with its distinctive architecture, St. Michael’s Church from 1958 – the world’s northernmost Catholic Church and Meridian   (Known as “Struve Meridian Support”) – a monument from 1856 in memory of the first international measurement of the Earth’s shape and size.The monument is listed as a UNESCO World Heritage Site.

Another attraction is the Museum of Reconstruction, which is a historical museum that documents the consequences of the forced evacuation during the 2 World War II and the rebuilding of the region in the postwar period.