Compare prices on car hire in Harstad from all the major brands and find the best deals. When you book through us, unlimited mileage and insurance are always included in the price given. 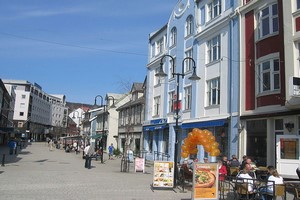 The coastal town of Harstad is located in Troms county in northern Norway , has 23,300 inhabitants (2010).The city is located on the largest island – Hinnøya – towards Vågsfjorden. From the island has been connected to the mainland via Tjeldsundbrua.

Harstad has a rich cultural life, and is also an important gateway. Quick route that runs between Bergen and Kirkenes arriving daily Harstad, both north and southbound ferries.

Tourist Attractions in Harstad is first and foremost the nature of the beautiful north-Norwegian coastal landscape. The city is also situated above the Arctic Circle, and one can therefore in clear weather to experience the midnight sun in summer and northern lights in winter.

Other attractions include Harstad Trond Arne District Museum – an exhibition of Harstad region’s history, Harstad Church from 1958, Trondenes Church from the 1200s, Adolf Cannon – the world’s largest land-based cannon, built during the 2 World War II, as well as sailing vessel “Anna Rogde” – built in 1867-1868. This is probably the world’s oldest sailing schooner.

6 km north of Harstad city is “Røkenes Farm and Guesthouse” from 1750’s. The place is a popular tourist attraction, situated in beautiful surroundings. There are many beautiful old houses, art gallery, restaurant / café and golf course nearby.

Harstad is host to the annual cultural event “Festival of North Norway”, and takes place in June. The Festival lasts for a week, offering concerts, exhibitions, plays etc.

Harstad / Narvik Airport is about. 45 km south of downtown.