Compare prices on car hire in Lillehammer from all the major brands and find the best deals. When you book through us, unlimited mileage and insurance are always included in the price given. 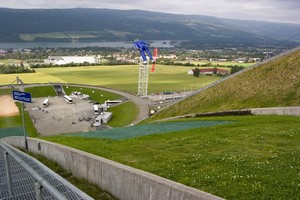 Lillehammer (26.100 inhabitants in 2009) located in eastern parts of Oppland county, and regional center for Gudbrandsdalen. The city lies at the northern end of the lake, which is Norway’s largest lake.

Lillehammer was given city status in 1842, and is internationally known as a venue for the Winter Olympics in 1994.

The city is also known to house one of the largest tourist attractions – Amusement Park. This is an amusement park with magic and adventure as the theme, where you can also try river rafting or take advantage of the onsite water park, car track, rides, cinema etc. In addition, you can visit our farm, where it held a number of livestock.

Other popular sights in town Lillehammer church from 1882, Lillehammer Art Museum – including works by Edvard Munch and his own department of contemporary art, Olympic Park, the Norwegian Olympic Museum (the history of the Olympic Games from 776 BCKr. to the present day) and Maihaugen – an open air museum with buildings from the period 1700 –   to the 1900s, which also Garmo stave church from 1200-century.The site also has a Postal Museum.

The steamship “Skibladner” is a popular tourist attraction. This is the only paddle steamer and oldest ship in operation – built in the 1850s. The ship travels on the lake and take off and the passengers in Lillehammer.