Compare prices on car hire in Longyearbyen from all the major brands and find the best deals. When you book through us, unlimited mileage and insurance are always included in the price given. 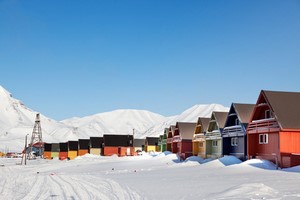 Longyearbyen is a coal mining which is west of the island of Spitsbergen, which belongs to the Norwegian archipelago of Svalbard in the Arctic Ocean. Svalbard is part of Norway .Longyearbyen has approximately 2000 inhabitants (2008), and Svalbard’s administrative center.

Longyearbyen is only 50 km stretch of road, and most important means of transportation on the island’s snowmobile and boat. In summer there are ferry connections to Barentsburg, and in the period from May to November is the ferry to the mainland.

The city has a variety of cultural activities, and services, and in the city’s restaurants, hotels / accommodations, shops, sports center (with pool). In Longyearbyen, there are also various concerts and entertainment events in the evenings, and the city hosts also several annual festivals – including Blues Festival in October and jazz festival in February.

The tourist attractions in Longyearbyen is first and foremost, the arctic nature and outdoor life, but also the Svalbard Museum is worth a visit. This is located in the Svalbard Research Park, is a natural and cultural history with an exhibition of objects related to Svalbard’s history – as well as literature, photography and art.

This is also the Norwegian Polar Institute and the Governor’s Heritage magazine.

Other sights in the city, Svalbard church from 1957, Galleri Svalbard – and “Spitsbergen Airship Museum” – which, with its exhibition tells the story of three airships that tried to reach the North Pole from Svalbard in the early 1900’s.

Svalbard Airport – Longyearbyen is about. 6 km northwest of downtown, and has regular flight connections to Oslo and Tromsø .