Compare prices on car hire in Røros from all the major brands and find the best deals. When you book through us, unlimited mileage and insurance are always included in the price given. 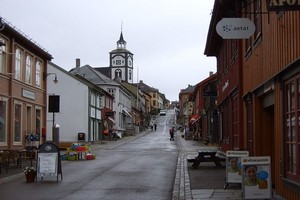 Røros (3,640 inhabitants in 2009) is a village in Røros municipality, located in South-Trøndelag county. The municipality borders to the east of Sweden. The landscape of Røros is hilly with large open spaces, and is over 600 m. In addition, the municipality has several lakes and two national parks – Femundsmarka and Forollhogna National Park.

Røros is an old mining town with a number of sites, and is entirely a UNESCO World Heritage Site. Røros Copper Works was started in 1644 and was operational until 1977. Nowadays instead Rørosmuseet.

Nearly 1 million people visit Røros annually, and the museum in the smelting of ores Square is the city’s biggest attraction. The museum with its exhibition World Heritage Røros with its mining history. You should also visit Slag Road at Malmplassen where towns inhabitants lived before, and a guided tour of the Olav Mine (which is 13 km from downtown) is also recommended.

The popular winter market – Rørosmartnan – is an annual event in February. The market lasts for five days, and has approximately 80,000 visitors every year.