Compare prices on car hire in Stavanger from all the major brands and find the best deals. When you book through us, unlimited mileage and insurance are always included in the price given. 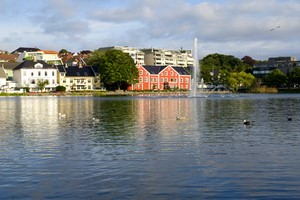 Stavanger, located in the northwestern part of the flat landscape Jæren – between Boknafjorden and the North Sea – is the administrative center of the county of Rogaland. The city has 121,610 inhabitants (2009), and with Norway’s fourth largest. Taking the entire metropolitan area (which includes the neighboring town of Sandnes) exceeds the population of nearly 200,000. Stavanger is often called “Norway’s oil capital” – as an extensive petroleum industry was established in the North Sea in the 1970s.

Stavanger’s history dates far back, and restored the Iron Age farm at Ullandhaug shows how people lived here in the Migration Period (ca. 350-550 ADNOK Since the 1120’s, when Stavanger was elected bishop, it has been regarded as a city.

One of Stavanger’s most famous attractions are the Stavanger Cathedral (St. Swithun). It was probably erected in 1120-the years and is Norway’s oldest cathedral. It is beautifully situated at the city lake in the center of town. Otherwise, it must be preserved and restored urban environment “Old Stavanger” is mentioned (173 wooden houses from the period end of the 1700s – the beginning of the 1800s), Valberg tower (ca. 1850) and the old port area of ??the harbor.

The city also has a number of interesting museums – including the relatively new Norwegian Petroleum Museum, Archaeological Museum (which is part of the University of Stavanger) Stavanger Art Museum and the Stavanger Museum, among others also includes Ledaal manor, which has status as a royal residence.

Otherwise, Stavanger active utelivsby, which, because of its association with the extensive petroleum operations in the North Sea, has an international flavor. And for families with children is King Park (one of the country’s biggest amusement park – 23 km south of Stavanger), a popular excursion.

Stavanger – Sola is located 16 km southwest of the city.

Booking of car hire in Stavanger near Stavanger Sola Airport has never been easier. Select destination in the search engine over, pressure on the car and enter your credit card details for immediate booking. You will be within a few hours to receive confirmation bestilllingen and information and address for the car rental provider.