Compare prices on car hire in Stjørdal from all the major brands and find the best deals. When you book through us, unlimited mileage and insurance are always included in the price given. 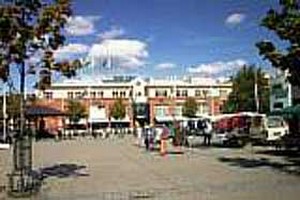 Stjørdal is a city with approx. 11,000 inhabitants (2010) – which is far south of the North-Trøndelag County – 33 miles east of Stjørdal .Stjørdal has had city status since 1997, and is an important trade center for the region.

The discovery of rock carvings from the stone age in several places in Stjørdal – including by Hegra – shows that people have been living here very long, and in the Middle Ages there were several large farms here. Tendency bydannelse arose, however, only in the 1700s, when craftsmen and traders began to move here.

Among the historical sights – in addition to carving the fields – we find the ruins of Steinvikholm castle, built in 1530 as a residence and fortress for the last Catholic Archbishop of Norway. Otherwise Hegra Fortress (also called Ingstad road soon) are mentioned. It was erected in the wake of the union in 1905, as a defense against possible attack Sweden.

One attraction of another species is Stjørdalselva, which is considered one of the Mid-Norway’s best salmon rivers.

One of the largest airports, Airport Trondheim – Vaernes , located 3 km south of the city ..