Compare prices on car hire in Bucharest from all the major brands and find the best deals. When you book through us, unlimited mileage and insurance are always included in the price given. 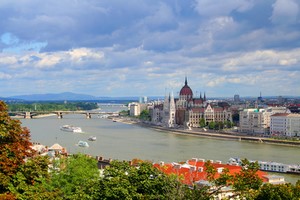 Bucharest is located in southeastern Romania , just 50 km from the border with Bulgaria to the south.Bucharest is the capital and largest city in the country with a population of nearly 2 000 000 (2009). Through the city flows the river Dâmbovi?a who later meets the river Arge? which is a tributary of the Danube. Bucharest is the country’s richest city and the industrial and cultural center in Romania.

Bucharest is a modern city with lots to tempt you with. Urban landscape is characterized by wide streets with lots of trees and parks as well as both new and old buildings. The famous street Calea Victoriei is d one the oldest street in town and dates from the 1600s.Here you can see the Cantacuzino Palace was built around 1900 and which today houses the George Enescu Museum. There are numerous museums in Bucharest, including the Cotroceni Palace & Museum, Art Collections Museum, Grigore Antipa Natural History Museum.

Henri Coanda International Airport is the largest airport in Romania and is approx. 17 km away Bucharest.