Compare prices on car hire in Sibiu from all the major brands and find the best deals. When you book through us, unlimited mileage and insurance are always included in the price given. 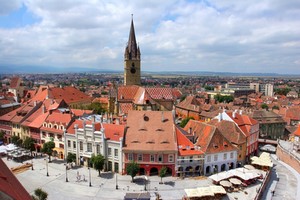 Much of the city has retained the medieval characterized and many historical sites are preserved. In the historic district, one can still see parts of the walls of defenses dating from the 1300s and 9 of the original 39 towers. The large square is the center of old town and was built in 1366, while the square Piata Huet stretches back to the 1100s. Sibiu offers several museums and leafy parks in addition to a zoo is the oldest in Romania and keep animals such as wolves, lions, jaguars and crocodiles.