Compare prices on car hire in Edinburgh from all the major brands and find the best deals. When you book through us, unlimited mileage and insurance are always included in the price given. 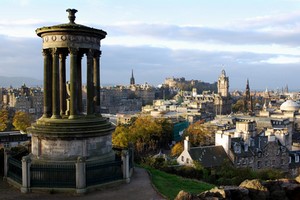 Edinburgh is the capital of Scotland and is part of the county of Midlothian.The city is located on the Firth of Forth which leads into the North Sea on the east side of the UK. Edinburgh is the second largest city in Scotland after Glasgow which is located about 80 km west of Edinburgh.The population of Edinburgh was measured at over 470 000 in 2008 and the city is the cultural center.

Edinburgh was established long before it was granted city status in 1329, and in 1437 received the city status as the capital of Scotland, which it had been since then. The city is a wonderful collection of buildings from large parts of the last millennium. Both the Old Town and New Town is listed on UNESCO’s World Heritage list. Old Town’s history dates back to 1000’s, while the newer town originates from the 1700s. Edinburgh offers so much as beautiful scenery, ancient castles, whiskey tasting and festivals.