Compare prices on car hire in Inverness from all the major brands and find the best deals. When you book through us, unlimited mileage and insurance are always included in the price given. 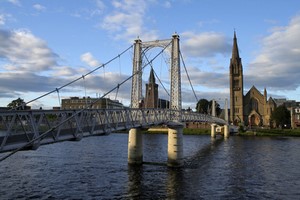 Inverness is called the capital of the Highlands which is located in the northern part of Scotland .Inverness is located on the east coast at the mouth of the channel Caledonian in Moray, which in turn leads out into the North Sea. Population in 2006 was estimated to be around 54,000 and is currently the fastest growing city in Europe. Inverness has been around for over 1000 years and was granted city status in 1180

Moniack Castle stems from the 1500s and today is produced in wine, jam and sauce of flowers and other natural vegetation. Visitors can tour the castle and see how the products are made. Like many other places in Scotland produced whiskey in Inverness, and there is a possibility of a visit Dalmore Distillery. It is about 15 km from Inverness to the famous Loch Ness where people for centuries have claimed to see the Sea Monster “Nessie”.

Inverness Airport offers mainly flights within the UK and is about. 13 km outside the city.