Compare prices on car hire in Stirling from all the major brands and find the best deals. When you book through us, unlimited mileage and insurance are always included in the price given. 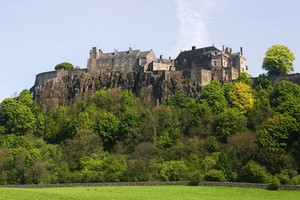 Stirling is a historic town with a central location in the southern part of the country. The city lies on the River Forth as a leader in the Firth of Forth. From Stirling, it is about 35 km to the capital, Glasgow which is located southwest of the city.In 2004 the population estimated to be around. 45 000.

Stirling Castle sits on a hill above the town and here among other things, the Scottish Queen Mary Stuart was crowned in 1543 when she was only nine months old. The National Wallace Monument, one can learn about the real story behind the Hollywood film Braveheart and see the sword of William Wallace. Part of the Scottish War of Independence was fought in and around Stirling Bridge with warriors like William Wallace and Robert the Bruce. In the old prison, the Old Town Jail from the 1800s can be enrolled as a trap and get a slightly different tour.

Edinburgh International Airport is the nearest airport and is located approximately 50 miles from Stirling.