Compare prices on car hire in Singapore from all the major brands and find the best deals. When you book through us, unlimited mileage and insurance are always included in the price given. 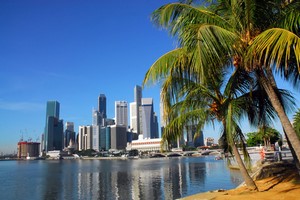 Singapore is a republic at the southern tip of Malayahalvøya (Malacca peninsula) in East Asia. The area is not more than 693 km2. It is an island nation that is largely made up of big city Singapore (4.6 mill.innb. In 2009), which naturally NOK is also the capital. The economy has in recent years has been very strong, and the country / city has a population with generally high standard of living. Singapore has a multicultural feel – and all four official languages: Chinese, Malay, Tamil and English.

A little outside the center, there are several nature reserves, where smaller areas of the island’s original tropical rain forest (including swamp and mangrove forests) are preserved. The climate is tropical and fairly humid and hot. The annual average temperature is around 27 degrees C. The Singapore Island is relatively flat, and the highest point – Bukit Timah – are not more than 163 m above sea level.

There are a number of tourist attractions in Singapore. Among the most popular are the zoo, where animals are presented in their natural surroundings, where you can also go on a night safari. Otherwise, recreation area Sentosa mentioned, such as includes several great beaches.

Singapore has one of the world’s busiest ports, and is in many ways a key traffic hub in East Asia. The main airport is Changi International Airport is the 5th largest airport in Asia.

Car hire is available at several locations in Singapore through Car-hire.net. The price you see is what you pay and include any airport taxes, unlimited mileage and all insurances.