Compare prices on car hire in Badalona from all the major brands and find the best deals. When you book through us, unlimited mileage and insurance are always included in the price given. 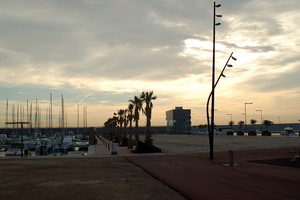 Badalona belongs to the province of Barcelona in the northeast of Spain and is a port city bordering the Mediterranean Sea.The city lies on the banks of the River Besòs and it is only 10 km to the provincial capital of Barcelona in the south. With a population of over 220 000 (2009), Badalona is the third largest city in the province. Badalona was built on Roman ruins in the 10th century and is one of the oldest cities in the region of Catalonia.

Like other towns along the Spanish Mediterranean coast, Badalona a beautiful resort with palm trees and beaches of 6 km. In the center there are many shops, cafes and restaurants, in addition to attractions and sights. Because of the age, it is possible to visit several historical sites, including the monastery of Sant Jeroni de la Murtra from the 1300s. The Roman museum is devoted to the remains of Roman baths and a city wall as well as art objects.

Barcelona Airport is about. 25 km south of Badalona and is the second largest airport in Spain.