Compare prices on car hire in Burgos from all the major brands and find the best deals. When you book through us, unlimited mileage and insurance are always included in the price given. 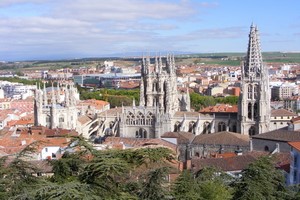 Burgos is located in northern Spain and is the capital of the province of the same name.The city lies on a plateau approx. 850 meters above sea level and near the river Arlanzón. It is about 250 km to the capital Madrid, which lies south of Burgos, a little over 150 km to the north coast and approx. 260 km to the French border in the east.In 2008, the population of almost 180 000

Burgos was founded already in 884 and the town is famous for its churches and monasteries. One of the most famous is the Gothic cathedral from the 1200s that are listed on the UNESCO list of world heritage and the monastery Monasterio de las Huelgas from the 1100s. The beautiful gate, Arco de Santa María was built in the 1300s. It organized several festivals in Burgos during the year. In summer it is a traditional festival among other things, historical costumes, as well as several parties with dancing, bullfights and exhibitions.

Burgos Airport is approx. 4 km outside the city and is also called Villafría.