Compare prices on car hire in Granada from all the major brands and find the best deals. When you book through us, unlimited mileage and insurance are always included in the price given. 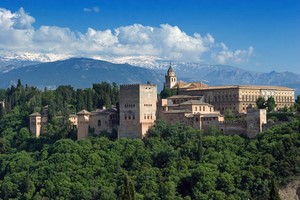 Granada is the capital of the province of the same name and is centrally located in the southern part of Spain .The city and the province is located in the region of Andalusia and the confluence of two rivers, Darro and Genil. Granada is situated at the foothills of the Sierra Nevada and the produced goods such as soap, liquor, and textiles. It takes about an hour to drive to the coast in the south, and in 2007 the population was estimated at approx. 240 000.

Probably the most famous attraction and landmark in Granada’s Alhambra, a vast and beautiful Moorish fortress and a royal residence, which towers over the city. The structure was built in 1200 – and 1300’s and is listed on UNESCO’s World Heritage list. Within the walls is of interest as a historical museum and beautiful gardens. Otherwise, you should visit the cathedral which was built between 1523 and 1703 and the old town with its Arab character.