Compare prices on car hire in La Coruna from all the major brands and find the best deals. When you book through us, unlimited mileage and insurance are always included in the price given. 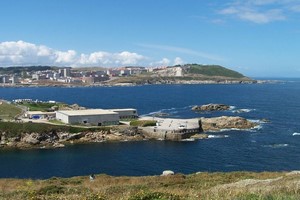 The most important port city on the Spanish Atlantic coast, La Coruna. It is located north-west of the country, specifically in the province of Galicia. In 2007 the population estimated at 244,388.

La Coruna is a beautiful city, with a famous and attractive waterfront. The most famous attraction, there are over 2000 years old Hercules Tower (Torre de Hércules) – the world’s oldest lighthouse.   It is situated on a hill with stunning views over the city and the sea. 1500-century fortress Castillo San Antón must also be mentioned. It is an attraction in itself, which also includes an archaeological and historical museums. Otherwise, there are a number of museums and art galleries in town.

It is a short distance from the center to several fine beaches, including Playa de las Lapas – located right near the Hercules Tower. It is not that great, but is highly situated between the cliffs.