Compare prices on car hire in Leon from all the major brands and find the best deals. When you book through us, unlimited mileage and insurance are always included in the price given. 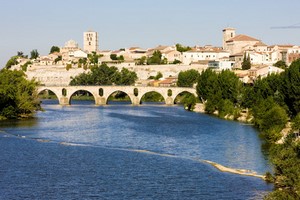 Leon is the capital of the province of León and located in the northwestern part of Spain .The capital of Madrid is about. 335 km southeast of Leon, while Portugal’s northern border is about 150 km southwest of the city.In 2007, the population of Leon at slightly over 135 000 The city was founded by the Romans, and in the 1st century BC Kr. had a Roman legion camp, which gave rise to the name.

Today it is still possible to see the remains of city walls that were built around 200 AD. Other historical sights you can see churches like the Gothic Leon Cathedral with two beautiful ornate towers from the 1100s. The Romanesque basilica of San Isidoro has a baptismal font from 1000-century and today houses a museum where it is on display including textiles from the Middle Ages. Of the festivities celebrated Easter and especially on Good Friday, and during the summer held the Festival of San Juan with bullfights and fireworks.

Leon Airport is located about 6 km outside the city center.