Compare prices on car hire in Menorca from all the major brands and find the best deals. When you book through us, unlimited mileage and insurance are always included in the price given. 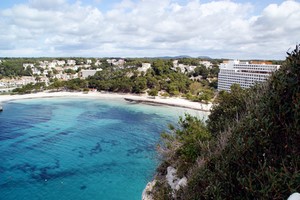 Balearic Islands archipelago in the Mediterranean has for years been one of Spain’s most popular tourist areas. Mallorca and Ibiza are one of themost famous islands, but Menorca is no less attractive. There has been a settlement since prehistoric times, and traces of this can still be seen in the large collection of megalithic monuments from the Stone Age and Bronze Age – one of the big tourist attractions on the island.

Menorca otherwise have a turbulent history. There has been a base for pirates, and that the Arabs and the British have dominated the area in each period. Today Menorca a peaceful place, which gets its revenue primarily from the many Leisure guests who come here.

Most people will experience Menorca less affected by mass tourism and stress than Mallorca and Ibiza .There are also beautiful mountains outside the town, where you can get a sense of untouched nature. Otherwise it is of course beautiful beaches, several places along the coast. Menorca has around 80,000 inhabitants. Many of them live either in the capital Mahon and the second largest city of Ciutadella.