Compare prices on car hire in Pamplona from all the major brands and find the best deals. When you book through us, unlimited mileage and insurance are always included in the price given. 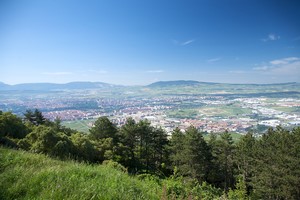 Pamplona is the capital of the Navarra region located in northern Spain .It is about 50 km to the border with France in the north and about. 400 km to the capital Madrid to the south.The city lies on the River Arga and the foothills of the Pyrenees. Pamplona was allegedly founded by Pompey by the name Pompaelo around the year 75 BC. Today the population of almost 200 000 (2008).

Pamplona is best known for hosting the festival Fiesta de San Fermín in the summer. Here is the famous running of the bulls through the streets and bullfights. In this context, the Plaza de Toros, where bullfights take place, popular. The Plaza de Castillo is much visited because bullfights were held here until 1893. Other festivities held religious celebrations such as Easter and Christmas. The Gothic cathedral was built between 1397 and 1530 and is considered one of the most important religious buildings.

Pamplona Airport is located about 5 km outside the city center and offers domestic flights.