Compare prices on car hire in Valladolid from all the major brands and find the best deals. When you book through us, unlimited mileage and insurance are always included in the price given. 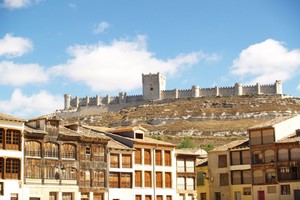 Valladolid is centrally located in the region of Castilla y Leon in the west of Spain .The city is the capital of the province of Valladolid and is located near the confluence of the rivers Pisuerga and Esgueva. It is approx. 150 km to the Portuguese border in the west and the capital Madrid, is located about 200 km south of Valladolid.On the 900-century Valladolid was a small village and began to grow throughout the 1100s. Today the population measured at over 315 000 (2009).

Valladolid is an old city with a historic feel, and the old city is the Plaza Mayor, surrounded by beautiful buildings from the Middle Ages, in addition to the Town Hall. Some of the historic buildings are the unfinished cathedral which was begun in the 1500s and a royal palace that is also from the 1500s. The explorer Christopher Columbus died in Valladolid in 1506 and author Miguel de Cervantes wrote part of Don Quixote here. Both their houses are preserved and there are opportunities for a round trip.

Valladolid Airport is approx. 10 km outside the city center.