Compare prices on car hire in Denia from all the major brands and find the best deals. When you book through us, unlimited mileage and insurance are always included in the price given. 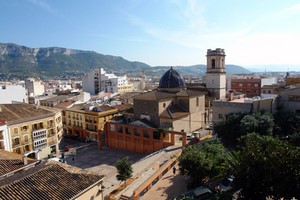 Denia is a charming port city on the outskirts of Alicante province in Spain .

Sailboat harbor witnesses of wealth in the small town despite the low population of nearly 40 000Another landmark, confirming the wealth is the castle Castillo de Denia which rises high on a cliff overlooking the city. There are also archaeological museum. As a Spanish coastal town can be found here as miles of sandy beaches with endless supply of water sports activities. Diving and fishing are also popular in the bays. Rock formations offer opportunities for climbing, horse riding and mountain biking. In the heart of the city, the shops and restaurants on each other and the menus consist of traditional Spanish dishes such as tapas and paella.

In summer months, a separate okseløp in town”Toros en el Mar.”which also means bull outfits in the sea. This is a rite of passage for young men who run in front oksegalloppen into the sea.

Denia has no local airport, but the closest option is to fly to Alicante with a bus connection from there.