Compare prices on car hire in El Ferrol from all the major brands and find the best deals. When you book through us, unlimited mileage and insurance are always included in the price given. 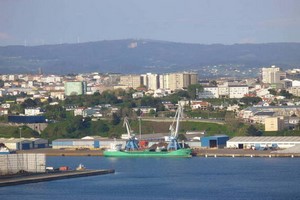 Ferrol is a Spanish city located in the province of La Coruna in the northwest corner of Spain .The city and the province belongs to the region of Galicia, bordering the Atlantic Ocean. The harbor is one of the most important naval bases in the country and the industry is based mostly on the shipyards. Ferrol is the birthplace of the former General Francisco Franco, who was called “El caudillo” and called Ferrol El Ferrol del caudillo between 1939 and 1982. Number of inhabitants in the city is measured at about 80 000 (2007).

When you visit Ferrol should first and foremost see the port where it can sometimes be warships, as there is a harbor town is most famous for. In addition, one should pay a visit to the Naval Museum located in the Club Naval de Ferrol, where there are tennis courts, golf, restaurants, dance rooms, swimming pool and more. Held each year the festivities that celebrate Easter and Summer Festival.

The nearest airport is A Coruna Airport located about 45 km south of Ferrol.