Compare prices on car hire in Huelva from all the major brands and find the best deals. When you book through us, unlimited mileage and insurance are always included in the price given. 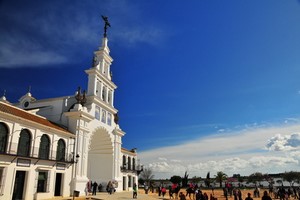 Huelva is the capital of the province of Huelva, which belongs to the region of Andalusia. The city is located in the southwest corner of Spain and lies on the east bank of the river Odiel, just above the place where the confluence of the River Tinto.It is about 55 km to the Portuguese border in the west and about. 20 km to the Atlantic coast in the south. The city has an important port from which the exported goods as iron ore and fish. The population was at almost 150 000 in 2008.

Huelva was inhabited by both the Phoenicians and Romans, and one of the remaining ruins are a Roman aqueduct that still takes water. Historic buildings include the churches Sanctuario de Nuestra Señora de la Cinta from 1400-century Iglesia de la Concepcion from the 1500s. Christopher Columbus traveled from this area in 1492 and a monument and other sites devoted to the famous explorer. Museo de Huelva is a historical museum housed in a modern building.

San Pablo Airport is located about 100 miles northeast of Huelva.