Compare prices on car hire in Lerida from all the major brands and find the best deals. When you book through us, unlimited mileage and insurance are always included in the price given. 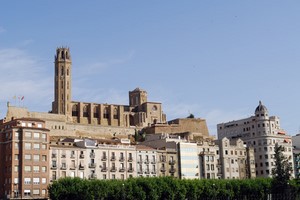 Lérida is often called Lleida is the capital of the province of Lérida. The city lies on the banks of the River Serge northeastern Spain .Lérida is about. 180 km west of the city of Barcelona and about 115 km from the Mediterranean coast in the southeast.Lérida is the 7th largest town in Catalonia with a population of approx. 135000 (2009). This is also one of the country’s oldest cities, founded around the year 300 BC.

It is still possible to see the ruins of the ancient Roman city walls and Roman buildings. Cathedral Seu Vella or Lérida Castle is a famous landmark and a beautiful cathedral that towers over the town on a small hill. The cathedral was begun in the 1200s and the clock tower was completed in the 1400s. Museum of Lérida is a historical museum and Roda Roda is a museum of cars and motorcycles. It organized several festivals in the city, including a carnival, Easter celebration, maifestival and autumn festival.

Lleida-Alguaire Airport opened in 2010 and is located about 15 km outside of Lérida.