Compare prices on car hire in Lugo from all the major brands and find the best deals. When you book through us, unlimited mileage and insurance are always included in the price given. 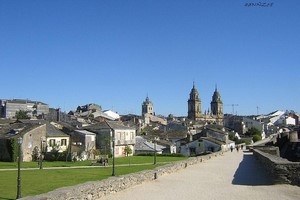 Lugo is the capital of the province of Lugo and located in the region of Galicia in northwestern Spain .The city lies on the banks of the River Miño and it is about. 160 km to Portugal’s northern border. There are about 100 km to the Atlantic coast in the northwest and about 500 km to the capital Madrid in the southeast.The population was measured at almost 100 000 in 2009.

Around the old city of Lugo is a Roman city wall, erected around the year 300 AD Kr and listed on the UNESCO list of world heritage. In the old town there are several squares and squares such as Plaza de Santo Domingo, the beautiful Cathedral which is located just inside the old city walls, was built in the 1100s. In Lugo held the Easter festivals and Christmas as well as festivals such as Fiesta de San Froilan with stalls and traditional goods.