Compare prices on car hire in Murcia from all the major brands and find the best deals. When you book through us, unlimited mileage and insurance are always included in the price given. 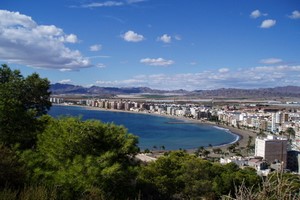 Murcia is located on the east coast of Spain in the region of the same name, right by the River Segura.The city has 422,861 inhabitants (2007). Murcia was founded in the year 825, and has many historic buildings and churches to show off. Although Murica mostly live on tourism, it is a relatively quiet town to vacation in. Whatever the season you will never experience the mass tourism in the city. The biggest tourist attraction in the city, which is also a landmark of Murcia, is the impressive Cathedral of Santa Maria. It was built around the 1400s, but the tower was not completed until 1792. The cathedral is a mixture of several styles, including Gothic, Renaissance and Baroque.

The old town is also well worth a visit for its charming narrow streets. Other attractions include Salzillo Museum with its beautiful sculptures and park area of ??El Valle, located on the hill behind the center.The view from the top is incredibly beautiful.

There are many beautiful sandy beaches in the region. By car it takes only 30 min. to drive from Murcia to one of the coast seaside resorts.

Alicante Airport is also often used by tourists going to Murcia.Driving time from Alicante to Murcia is approximately 1 hour.