Compare prices on car hire in Oviedo from all the major brands and find the best deals. When you book through us, unlimited mileage and insurance are always included in the price given. 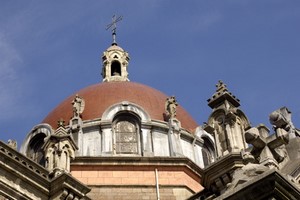 Oviedo is the capital of the province of the same name and located in the northwestern part of Spain .The city and province belongs Asturias region and it is about 30 km to the Atlantic coast to the north. It is approx. 450 km to the capital Madrid in the southeast, and its population is estimated to be around 225,000 (2009).Oviedo was founded in ca. 760 and had high prestige in the 900-number.

Cathedral of Oviedo is a known land market that was built in the 1300s, and here lies the tomb of several of the Asturian kings. The cathedral is located in the old town with its narrow streets and historic buildings. Old Town, which consists of the original town, has hardly changed over the years. Several of the churches that are found in and outside the city is a UNESCO World Heritage list. Oviedo has many museums to offer visitors, including an archaeological museum and the Museum of Asturias Museum of Fine Arts.