Compare prices on car hire in Tenerife Airport North from all the major brands and find the best deals. When you book through us, unlimited mileage and insurance are always included in the price given. 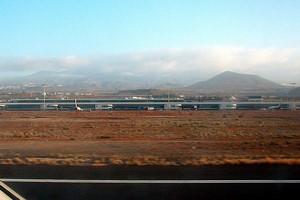 Tenerife North Airport (TFN), formerly known as Los Rodeos Airport, located 11 km from Santa Cruz. There are good bus service between the airport and Santa Cruz. There are 5 different car rental companies at the airport, there are Auto Reisen, Avis, Cicar, Europcar and Hertz. 4,125,131 passengers visited Tenerife Airport North in 2007 which is the smaller of the two airport on the island of Tenerife. The airport serves 16 different destinations, mainly within Spain .Tenerife Airport North is known for the worst air disaster that has ever happened in history. In 1977, collided a KLM Boeing 747 and 587 people were killed. Tenerife Airport North offers 5 different bars and cafes. It has several shops, some of which sell handicrafts and other special products from the Canary Islands. Other amenities include a pharmacy, a VIP lounge, ATM and first aid.